Program note:
In the scored contrapuntal music of the West, the combination of different voices often parallels the notation of the score. A classical string quartet, for example, is generally notated in four voices, each of which is bound to an instrument of the quartet. Music that is handed down orally, on the other hand, often features a higher level of contrapuntal organisation, made necessary by the absence of written parts. The different voices are distributed among the different players with considerably more subtlety.

The instrumentation of the saxophone quartet is unusual in classical music. The four instruments are, in comparison to the string quartet, relatively homogeneous, with each instrument representing a broad palette of colours and different playing styles. This combination features four instruments which, paradoxically, resemble each other so closely that each can stand in for a multiplicity of different instruments.

When the Habanera Quartet commissioned me to write this piece, I realised that this peculiarity provided a solution to the issue which was of greatest musical interest to me at the time, namely the relationship of the whole to the individual parts. In Durch, the music is almost never the sum of its parts. Depending on how sharply one’s hearing is focused, everything develops from one figure and is a unified whole, in constant development. This figure becomes a mosaic, consisting of small, simple elements, ordered in a regular fashion. With the sharpest possible focus, each of these elements gains its own voice, as if via a line laid in perspective through the sound space and a dense counterpoint of colours and rhythms. This alternation between the binding together and the individuation of elements makes for constant progress, emanating from light and striving for breath –as indicated by both the meaning (‘through’) and the sound of the (German) title of the piece.

This work is dedicated to the memory of Gérard Grisey, who was my Professor in composition and taught us to value musical ‘ethics’ and aesthetics for four years at the Paris Conservatoire, and who suddenly died in November 1998, while I was composing this piece. 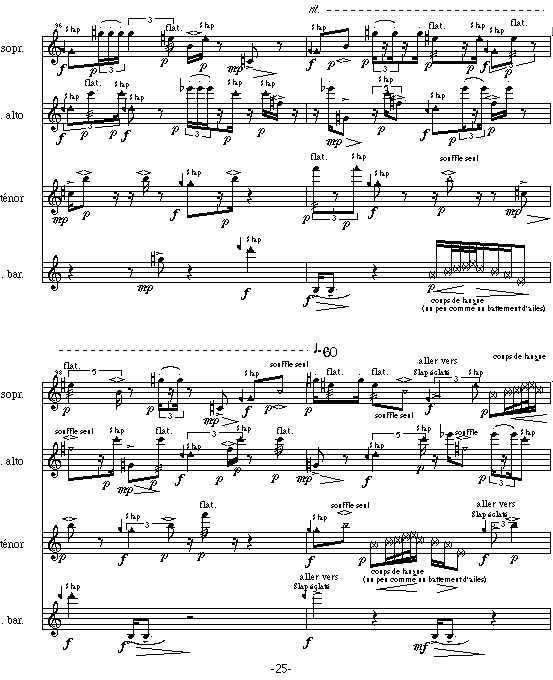