Commentaries from a computer about a misunderstood concert (2002)

OS 11 (Big Sur) and after (66Mb) [automatically opens with the stand alone interface the software supercollider, but knowledge of the software is not necessary]

. Sound manager / drivers: Supercollider, the software behind Soliloque, can work with the default Apple sound manager installed on your Mac. This driver is however only stereo. Supercollider also works with many other sound cards (Motu, Digidesign/protools, etc..) if you want to run it in multichannel. Once these drivers are downloaded, place them in the right folder, and change the sound manager in the Apple preferences. Important: activate the multichannel soundcard BEFORE opening Soliloque.

Possible known bugs: possible crash in case of too long path betweens the different elements. If you see any difficulty, simply put your sounds in a folder on the desktop, and everything not so far from the Soliloque software. Also, the first time, the interface doesn’t find the path. Open it many times, until it stays open.

Possible known bug: in the version for OS11, in case the exit stays in stereo, ask Supercollider to have more voices with the instruction ” s.options.numOutputBusChannels = 8; “. But normally, it is not needed.

3) Recording of the result:
You can record the result while playing the piece in clicking on “record” in the internal server window. The soundfile appears in the folder Supercolliderrecordings in your music folder. 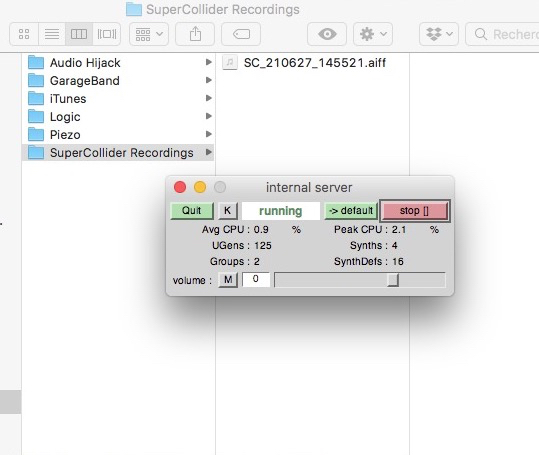 4) Protection and copyright of Soliloque about [X, X, X and X]
Soliloque about [X, X, X..] is a freeware . It can be freely played for public or private audience. We only request concert organisers to respect the construction of the title of the piece (Soliloque about [X, X, et X], where the X are the first name of the composers of the samples), to aknowledge the name of the authors (Fabien Lévy -composer-; Thomas Seelig and Frederic Roskam – musical assistants), and to quote the program notes written above. This work is protected by the SACEM (French society for copyright). We also would be happy to be informed about any concert programing Soliloque and to receive a record of your version of Soliloque.